Designed with total accuracy in mind, the kit is based on thorough research of the original-movie 1.7 metre studio model. It features faithful detail with no compromises!

A snap fit kit. No glue required except for Photo-Etched parts

The ‘1.7-meter studio model’ is truly special to every Star Wars fan.

It all began with the studio model used to film Star Wars: A New Hope.

Producing a ‘perfect replica’ is an extraordinary challenge. It is also the ultimate wish that fans have dreamt about fulfilling.

To all Star Wars fans who have been committed to that wish, here is what Bandai has to offer. Here is the ultimate Millennium Falcon. 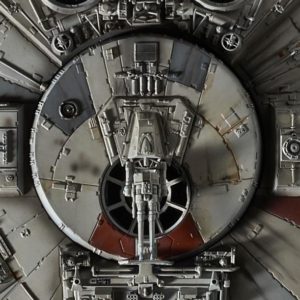 The precisely recreated quad laser cannons are mounted onto the detailed turret seats and triggers.

Experience the distance between the gunner and the cannon during battles.

Walls of the Holes 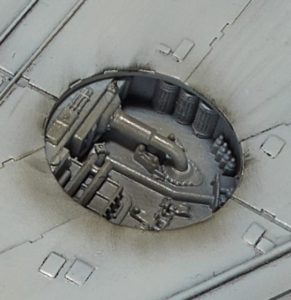 Focus on not only on the structures inside the holes, but also the walls of the holes.

These cylindrical walls are covered with various configurations, each with their own functions.

Sides of the Ship 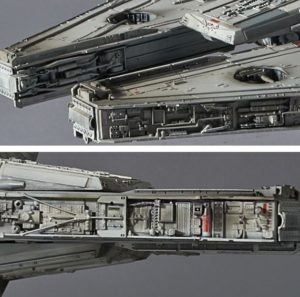 Separate pieces for each detail were created to recreate the deeply-detailed sides of the ship in a three-dimensional fashion. The free-running pipes are represented in combination with individual pieces for a closer resemblance to the studio model.

Around the Exhaust Ports 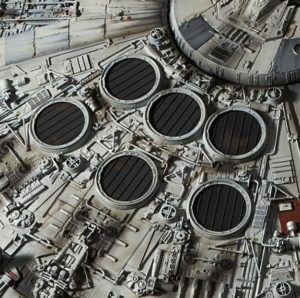 The complex details on the top of the Millennium Falcon are precisely crafted. This level of detail is impossible to recreate in anything smaller than this 1/72 scale model.

The kit offers a choice between plastic and etched pieces to create the mesh vent grills, allowing for a more in-depth recreation. 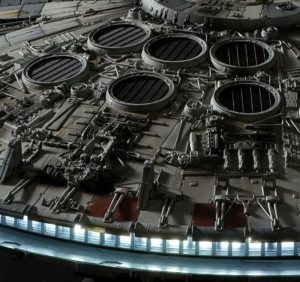 It is widely thought that light from the Millennium Falcon?s sublight engines is blue. However, the light shown when Star Wars: A New Hope was released was white. For the PG 1/72 Scale Millennium Falcon, white lights were chosen as a sign of respect toward the first movie.

The unique curved engine consists of light guiding parts that recreate the way the engine would light up in the movie. 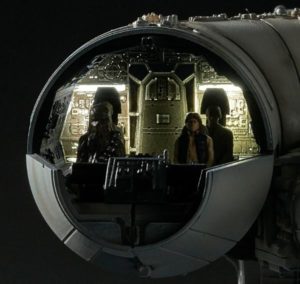 The characteristic panels on the back of the cockpit light up as seen in the movie, evoking memories of memorable scenes. 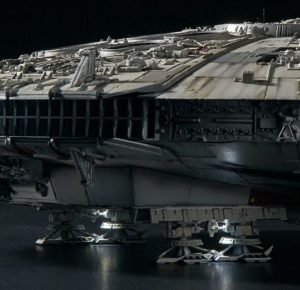 The three iconic landing gear legs are illuminated with LEDs and sturdily support the ship they did in the movie. The lights also help to recreate the image of the ship when it is parked.

Berkshire Dolls House & Model Company do not disclose buyers’ information to third parties other than when order details are processed as part of the order fulfilment. In this case, the third party will not disclose any of the details to any other third party.

Cookies are used on this shopping site where they are strictly necessary for the site functionality. They are used to aid navigation, and to keep track of the contents of your shopping cart. If you log in to an account, your logged-in status is recorded in a temporary cookie. If you select the ‘Remember Me’ Option in the checkout, a cookie will be used to remember your details. You can turn off cookies by blocking them in your browser Privacy settings. If you turn off cookies, you will be unable to place orders or benefit from the other features that use them.

Data collected by this site is used to:
a. Take and fulfil customer orders.
b. Administer and enhance the site and service.
c. Only disclose information to third-parties for goods delivery purposes.

Necessary Always Enabled
Necessary cookies are absolutely essential for the website to function properly. This category only includes cookies that ensures basic functionalities and security features of the website. These cookies do not store any personal information.
Non-necessary
Any cookies that may not be particularly necessary for the website to function and is used specifically to collect user personal data via analytics, ads, other embedded contents are termed as non-necessary cookies. It is mandatory to procure user consent prior to running these cookies on your website.
SAVE & ACCEPT