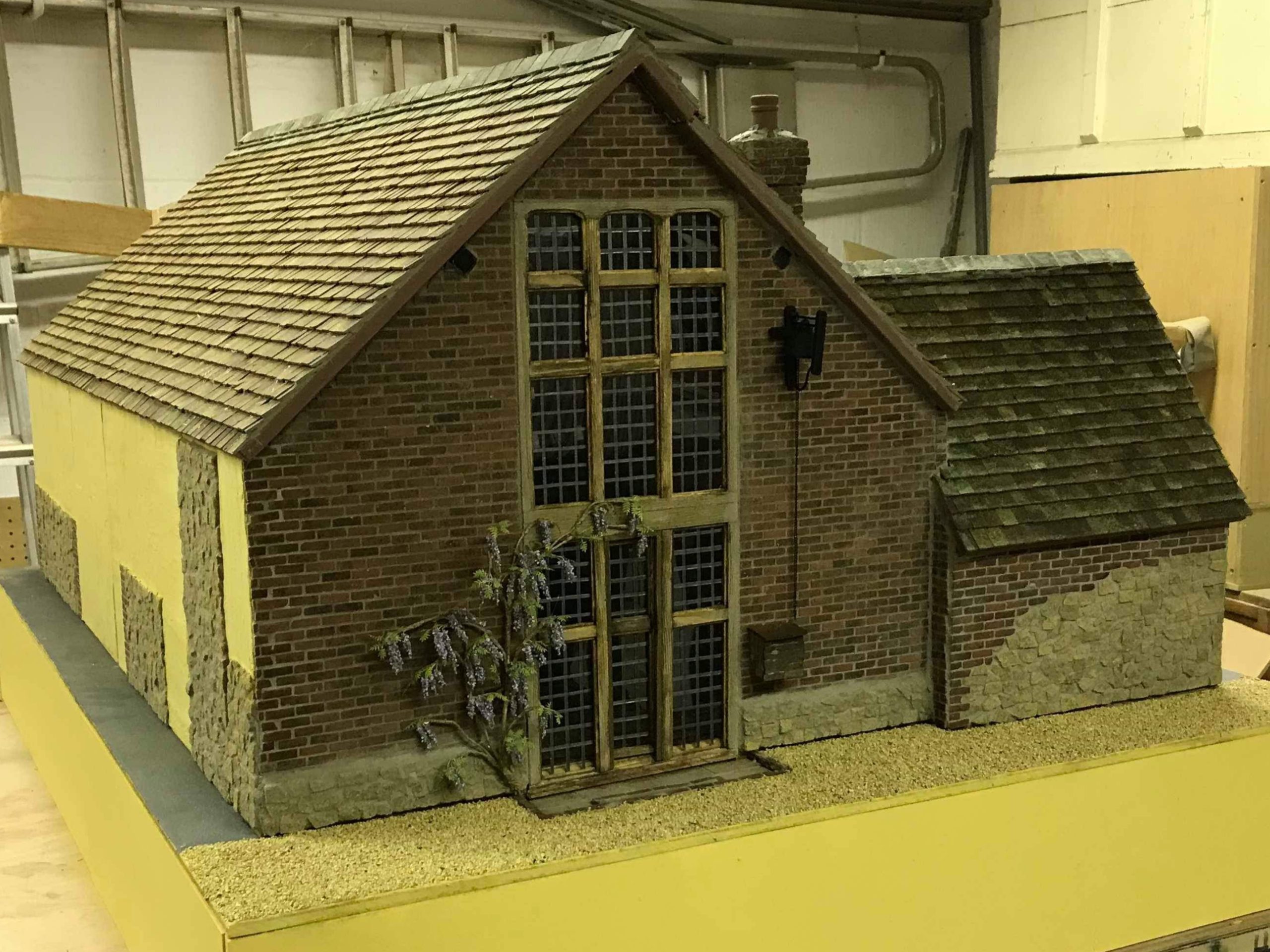 On Tuesday 4th February 2020 our miniatures and a bespoke piece were featured in the ITV Programme Midsomer Murders: The Miniature Murders season 21 Episode 2. The worlds of miniature dolls houses and real houses collide when a prolific estate agent is murdered in front of a crowd at a doll house exhibit.

Berkshire Dolls House Company were asked to create a bespoke 1/12th scale replica dolls house of an existing building in which they had chosen to set the episode. Howard and the team were asked to visit the location site to take photographs and complete research. Plans were then drawn up by measuring up the real building. The toughest part of the project recreation was the mullion window at the front of the house. The window was hand crafted and glazed with the integrated use of real lead to create an authentic leaded light effect.

The dolls house was made with opening panels and additional hinges to enable the crew to place and manoeuvre cameras for internal close up shots. The outside of the house was rendered with stone work and bricks. Paint techniques and weathered roof tiles were then used to created an authentic look. The interior of the house was also required to be exactly replicated. As such, it was clad with oak beams and real wood flooring. The house also contained an authentic staircase and a trap door which led to the basement. The basement was clad in a clay mix which was then etched to create the stone effect.

The production team were delighted with the replica dolls house and used many pieces as well as other houses from the shop to dress the sets featured in the episode. The entire opening credit sequence is filmed inside dolls houses, really showing off the delights of miniature collections. A keen eye will spot several houses that we have in stock throughout the programme. We hope you enjoy it as much as we did. Look for the close-ups of the bespoke house in the show that demonstrates the amazing eye for detail that Howard and the team have.

Make sure you check it out on catch up and let us know if you “figured” out whodunit?

Berkshire Dolls House & Model Company do not disclose buyers’ information to third parties other than when order details are processed as part of the order fulfilment. In this case, the third party will not disclose any of the details to any other third party.

Cookies are used on this shopping site where they are strictly necessary for the site functionality. They are used to aid navigation, and to keep track of the contents of your shopping cart. If you log in to an account, your logged-in status is recorded in a temporary cookie. If you select the ‘Remember Me’ Option in the checkout, a cookie will be used to remember your details. You can turn off cookies by blocking them in your browser Privacy settings. If you turn off cookies, you will be unable to place orders or benefit from the other features that use them.

Data collected by this site is used to:
a. Take and fulfil customer orders.
b. Administer and enhance the site and service.
c. Only disclose information to third-parties for goods delivery purposes.

Necessary Always Enabled
Necessary cookies are absolutely essential for the website to function properly. This category only includes cookies that ensures basic functionalities and security features of the website. These cookies do not store any personal information.
Non-necessary
Any cookies that may not be particularly necessary for the website to function and is used specifically to collect user personal data via analytics, ads, other embedded contents are termed as non-necessary cookies. It is mandatory to procure user consent prior to running these cookies on your website.
SAVE & ACCEPT